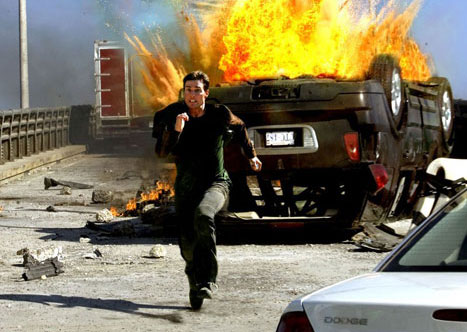 On Friday, I decided to catch a matinee showing of Mission: Impossible 3 despite the misgivings from other bloggers. The venue was the Silvercity Theatres in Coquitlam, a twenty-screen complex close to where I live.

I bought a ticket for the 4:15pm show and said ticket indicated I’d be in auditorium 20, one of the largest in the place. Twenty minutes before showtime, I attempted to enter the auditorium to get a good seat. As the ticket taker ripped off a portion of my ticket, he instructed me to line up off to the side.

Line up? Even on opening day for an expected big movie like M:I 3, there usually aren’t line ups for a 4:15pm showing. The ticket taker directed me towards some velvet ropes where a young couple was already waiting. I was about to line up with two other people for an auditorium that probably could fit 200 people, 20 minutes before showtime. What the hell?

Anyways, puzzled as I was, I lined up behind the couple, feeling a bit silly. Another couple arrived and were also directed to line up. That caused more puzzled faces as the new couple stood behind me. Out of nowhere, a management type in a dress shirt walked over to talk to us.

“Excuse me, the reason you’re lining up is because we have an injured patron in the auditorium right now. She thinks she might have injured or even broken one of her ribs. We’re waiting for the paramedics to come and then we’ll get you into the theatre as soon as this is resolved.”

Some one then asked how she might have broken her rib.

“I am not sure at the moment what happened.”

With that, he was off and began speaking into a walkie-talkie. Man, M:I 3 must be one hell of a movie! Cruise sure does deliver!

The minutes go by and people are herded behind me and everyone is surprised they have to line up. More management types flitter into and out of the auditorium. Finally, two paramedics arrive, escorted by an employee. They saunter in as if on a Sunday stroll. They don’t seem urgent nor is a stretcher visible. In they go into the auditorium.

Several more minutes go by. One of the paramedics emerges and he is followed by a theatre employee. More waiting. They come back but this time, they are wheeling in a stretcher with all their gear. We wait several minutes more, the movie should have started two minutes ago.

I can see partially into the auditorium and the stretcher is now being wheeled out. Once into the main hallway, I can see someone on the stretcher. She’s covered with a blanket and there’s a towel on her face. I can’t see anything. Following the stretcher are two people, a girl and a boy about fifteen or sixteen years old. They have extremely concerned looks on their faces. The girl repeatedly mouths the words, “Oh my God” over and over again as she walks away.

With that little bit of drama over, we directed to enter the auditorium at our leisure. I find a nice, comfy seat with a great sight line and I have the whole row to myself for the entire movie. Even after everyone is seated, there are great swaths of empty seats separating movie goers.

So, the question remains, how does one break a rib during or after a showing of Mission: Impossible 3? I have a theory and it might remain a theory unless I find some real report on the incident. Anyways, we are all aware of the antics that Tom Cruise has displayed in the last few months. The most visible of which was the infamous couch-jumping incident when he appeared on Oprah. My guess is that the girl attempted to recreate the moment by jumping on the movie theatre seats, slipped somehow, and then landed on her side on the arm rests.

This is pure conjecture of course but it’s fun to fill in the details. You know, if you can ignore all the Scientology and Katie Holmes stuff, the movie is actually pretty good. For your entertainment dollar, I don’t think there’s another actor who is as impressive as Tom Cruise when he’s running away or into danger. That one scene when he’s running away from the missile that’s about to strike the car behind him on the bridge? It’s pure, rib-breaking movie magic!