Today was the first full day that I was in the new building that my company moved to. We were at Broadway and Arbutus. Now we’re just off of Fir near Granville Island.

I still have a window, though my window now faces a courtyard. Oh, the beloved bus stop view is no more. The building has a big problem with heat. Some areas are stifling hot while just ten feet away, people are freezing. I’m in the Arctic area. The lighting is kinda weird too. When it’s sunny, there’s almost too must natural light and there’s glare coming off my monitor. When the sun goes down though, there’s not enough artificial lighting for my taste. There’s some adjustments to be made for sure.

The building is much bigger than where we were before but I’ve heard some grumbling about some people lost some space. Everyone seemed to go to Granville Island for lunch today. Everyone also seemed to complain about how expensive lunch was. There’s no way you can get a decent and reasonably priced lunch on the Island. Everything there is relatively expensive. For more moderately priced fare, the key is staying off the Island and going to places along and off of W. 4th Ave. We’re going to try to walk to Connie’s tomorrow. Oh, I can already taste the won ton soup.

I’ll try to take some photos of the new place in the next couple of days.

Now here’s a video that combines two of my favourites, Peter Griffin from The Family Guy and TV funnyman David Letterman.

Even if you don’t participate in the sport, almost every Canadian knows some aspect of curling. I’ve never watched an entire match from start to finish and I have no clue when the Briar is usually held in the year. Yet, I know what a guard, the house, the button are in terms of the curling world.

Tomorrow, Brad Gushue of Newfoundland will face Finland in men’s curling gold medal match. If you think curling has all the excitement of watching paint dry, I invite you to recall the details of the men’s gold medal match back in 2002. Canadian skip Kevin Martin faced Norway four years ago. The gold medal came down to one rock in the hands of Martin himself. Did he have to make a crazy three rock takeout? Perhaps he needed a shot with more curl than my afro wig? No, he needed none of those. What he did need was to place his last rock some where on the button, the two feet in diameter circle right at the center of the house.

Amazingly, there were no other stones in his way. He had a straight path onto the button. It would have been a shot he’d done a million times in practice and for someone of his calibre, a shot that must have seen too easy.

I watched Martin make that last shot while I was at the employee lounge at EA. I stood behind a couch as he released the stone from his hands. About ten feet away from the house, the damn thing looked way too heavy to me. It continued to slide with a demonic pace as the rock penetrated the outer rings. I knew then that Martin had choked on a shot he should have made in his sleep. As the stone rumbled past the button, I silently wished it would catch on some rough ice. My wish went ungranted as Martin fumbled his way into a silver medal finish. We were left stunned at his poor shot.

I turned and left the lounge in a huff, thinking that Martin had choked in a uniquely Canadian way. As I walked back to my department, I met up with co-worker Chris D. who expressed similar sentiments on the whole debacle. Afterwards, what pissed me off even more was Martin’s comments. He seemed only mildly disappointed that he had missed the shot.

Of course you can tell I barely remember anything about that shot taken four years ago. Let’s hope Gushue brings home the gold for Canada tomorrow. The match starts at 8:30am PST for those who are interested.

I understand that movies are all about suspension of reality, but Matthew McConaughey’s new movie, Failure to Launch, requires you to drink just a little too much Kool-Aid.

In the movie, he plays a handsome, successful dude who drives a nice car and has no trouble attracting women. The catch? He lives and has always lived with his parents. Get the fuck outta town. Dudes like that don’t live with their parents. The dudes who actually live with their parents are guys like me and even then, I’m only doing it to pay off some loans faster. McConaughey’s character is supposedly 35 years old and has never lived on his own. WTF? Hell, even I lived on my own for a few years.

This movie is an interesting development though. In the last 10 months, three movies now have loosely mirrored my life, the other two being Just Friends and Grandma’s Boy.

Two thoughts come to mind tonight. The first is, I’m nervous about the hockey game tomorrow. With both Malkin and Ovechkin, the Russians will have no shortage of offense. If their goaltender is even moderately good tomorrow, we’ll be in tough.

The second thing on my mind is that if you could sell phlegm and mucous on the free market, I’d easily be the world leader in both quantity and quality. Here’s a diagram I found on some random site.

When my alarm went off this morning, I gave it my best but there was no way I was making it to work today. It hurt just to move my head, so I just went back to sleep.

It was around 10:15am when I woke up and it was time for me to inform the office I wasn’t coming in today. It took about fifteen minutes for me to crawl the two feet from my bed to the computer chair. Once there, I was able to send off an e-mail in short order. With that done, I crawled back into bed where I dozed off and on until 11:30am.

It was time to watch the women’s hockey gold medal game. Don’t tell my sister this, but I watched the game in her room because she’s got the bigger TV and the larger duvet. What followed was an entertaining two and a half hours of televised sport. Congrats to the ladies. They entered the Olympics as heavy favourites and never faltered once. Insert dig at Canadian men’s team here.

I spent the rest of the afternoon checking work e-mail and watching Ellen, Oprah, Dr. Phil, and a little bit of Montel. Say what you want about Oprah but she puts on a slick production. She had this one guest on that bought a pair of Oprah’s shoes from an auction. Whenever life threatened to overwhelm this lonely woman, she would put on Oprah’s shoes to give her strength. Both women got quite emotional over this as did some of the audience. I wonder if Oprah torrents exist? Can you imagine? Some 40 yr. old soccer mom from the mid-West with the name l33tMuther probably seeds the show every day.

Anyways, I took a short nap before dinner and when I awoke my two day long headache had miraculously disappeared. It looks likely I’ll be able to drag my ass to work tomorrow, though my sinuses are completely clogged now. Fair trade I suppose.

Holy crap, there are Oprah torrents! Here’s one for the show I watched today!

Well, I managed to get sick on the weekend. On Saturday night, I came down with a headache, chills, and fatigue. I crawled into bed around 1am, which is usually early for me. Despite having a warm duvet, it felt like I could not generate enough body heat, my feet were freezing the entire time.

When I awoke in the morning, my mind was clouded by this fog that went never away. It was an effort to even move so I spent most of the day just napping or watching TV. I’m into day two of the three day Cold-FX treatment. It’s supposed to help speed recovery but I can’t imagine feeling worse than I do now.

I don’t forsee a miraculous recovery overnight so I’ll be most likely taking the day off work tomorrow. That’s too bad because, strangely enough, there were some things I would have liked to get taken care of tomorrow.

And with that, I’m going to bed. 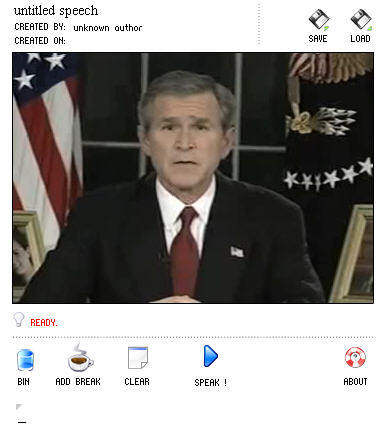 If you wander over this web site, you’ll find a pretty neat Bush custom speech generator. Bored of his state of the unions? Now’s your chance to write your own. They need to add a few more words to his vocab to make him sound more intelligent, but you can say the same about real Bush as well. Save your own and share ’em with the world! 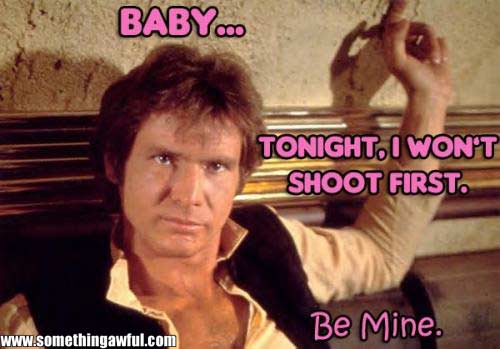 Ok, I know Valentine’s Day was on Tuesday but this was too good to pass up. The folks at somethingawful.com decided to have a Photoshop contest. The goal was to make the best Star Wars themed Valentine’s Day cards.

The one see you above was pretty good but there’s a lot more to see in the rest of the entries. Check them out here.

Another Winter Olympics Games have started as most of you know. After moving venues from North America, the world has gathered in Italy. For people living in Pacific Standard Time, the time difference is a real bitch to deal with.

Italy is nine hours ahead of PSTers which makes it tough to watch most morning events unless you’re unemployed or work weird hours. Consider that when it’s 11am in Italy (a good time for most events to start), it’s 2am here in Vancouver.

The Canadian men’s hockey team will play their first game at 4am Vancouver time. It’s likely that by the time you’re reading this, the game will be over and done with by several hours. A part of me wants to stay up to watch just a little bit of the game. I just want to see the boys in their jerseys for a few minutes, maybe watch ’em get a comfortable lead. This would probably make work a writeoff the next day and that wouldn’t be too professional.

When the Nagano games were on in 1998, I was an unemployed bum so I watched all the games live on TV, in all their 2am glory. Man, those were heady times… heady times indeed. I’m also envious of university students, who can stay up late and just skip classes the next day.

I have to say, all you EST people, those three hours do make a difference. For you guys, the hockey game is a 7am start, almost reasonable.

Well, I better head off to bed… hmm…. just three more hours to go… I wonder…