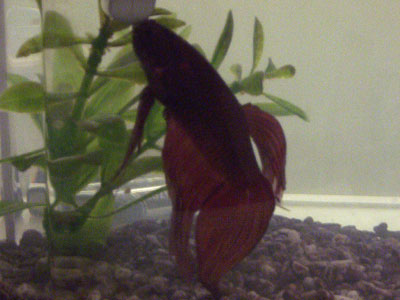 On Friday night, after returning from an evening out, I came home to find that Picky, my beloved Betta fish, had passed on sometime during the day.

I could tell he wasn’t healthy for several weeks prior to his passing. He was very lethargic and would spend most of his time resting on a plastic plant in his tank. He ate very little. For the last two weeks, I tried giving him “Betta medicine” which was a few drops of tea tree oil in his water. I was going to give him some anti-biotics tonight but it was too late.

I would have had Picky for two full years next month. He was two years old or at least very close to that age. I have never had a fish last that long in my care. As a kid, my mom used to buy me goldfish which seemed to live for about a week before dying. After a year with Picky, I began to marvel at the longevity of a fish that was barely three inches long.

Picky was a very thoughtful gift given to me by Carolyn B. on my birthday in 2004. I wasn’t expecting a gift from her and I certainly wasn’t expecting a living creature. Carolyn made it easier on me though, she got a whole starter kit which included a tank, gravel, a plastic plant, some food, and water conditioner. Picky was in a bag of water, much smaller than he would grow up to be.

Picky acquired his name after I discovered he was a very choosy eater. He barely touched the flakes that came with his kit. I eventually discovered he liked his food in pellet form. His favourite treat were blood worms which Dana would periodically get for me.

To understand how long I had him, consider I got him while I was still living at St. John’s College. He survived the cold of the winter and then stuffy heat in my room when it was the summer. When the first eight months had passed, I had to move out of SJC and back home with my parents. He got through the hour long car ride fine, travelling in a Tupperware container.

When I finally got my T-Bird apartment three weeks later, he had to stay with my parents because I wasn’t ready for Picky yet. I had a major case of food poisoning and I was really busy with school. My parents aren’t really the best caretakers in the world so I had a bit of apprehension about leaving him with them.

About mid-October of 2004, I got him back when things were settled in my apartment on-campus. His tank was placed on a bookshelf in my bedroom and there he stayed for close to a year. He was in the care of some SJC folks during the 2004 Christmas holiday but that was only a three day event.

Picky was a particularly feisty fish during my last year of school. If you approached his tank, he would swim furiously at you trying to get past the plastic wall of the tank. I was amazed at his eyesight as well. Though he had tiny eyes, he would be able to notice me wake up in my bed from several feet away. I would open my eyes and see a storm of activity in his tank as he tried to swim towards me.

After the year at my T-Bird apartment, we came back to my parents place. I know this sounds corny but Picky was very reserved after I moved him here. He very rarely tried to meet you at the edge of the tank. Instead, he spent most of his time perched on top of a plastic plant. The only good sign was that he was still eating regularly. He did, however, seem depressed if that’s possible for a fish.

In the end, I’m not sure what Picky succumbed to. Was it old age? Was it an infection? I will never know. I was hoping he would make it to my next birthday, so I could say he’d been with me for two years. We came really close though.

I am still amazed that something so tiny lived so long. All I did was give him food and changed his water.

I am not sure if I’ll get another Betta right away. Picky’s tank will remain dry for a while.