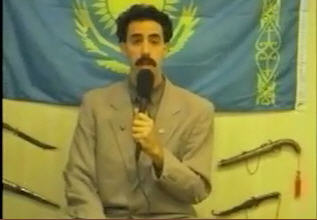 As I reported in an earlier post, the government of Kazakhstan has threatened to sue Sacha Baron Cohen over his portrayal of Borat, a bumbling, racist Kazakhstani reporter.

Long-time erwintang.com reader Sarah K has notified me that Borat has responded to the controversy. In a prepared statement, Borat claimed to have no connection with Baron Cohen and that he fully supports his government in possible legal action against the comedian. Furthermore, Borat added that after reforms in 2003, “women can now travel on inside of bus, homosexuals no longer have to wear blue hat and age of consent has been raised to eight years old”.

You can view a video of the statement on Borat’s own personal web site. Be sure to check out video clips and pictures from his travels around the world. Also included in his video library is a clip from the MTV Europe Music Awards where host Borat told the audience to “prepare for masturbations” as the Pussycat Doll were about to take the stage.