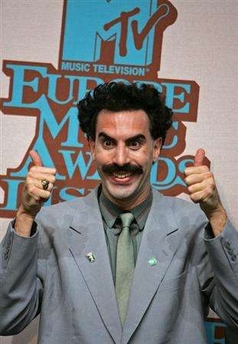 Some of you know I’m a big fan of Sacha Baron Cohen, known for his comedic characters such as Ali G, Borat, and Bruno.

Just a few days ago, Cohen hosted the 2005 MTV Europe Music Awards in his Borat persona. What followed was a display of comedy not seen since… well, since I saw Borat on TV last.

You can view a promo he shot for the awards show here (Windows Media, 13 Mb). Don’t miss Borat mentioning his delight for “hand relief” and misprouncing Lisbon as “lesbian”. Without a doubt, Borat ain’t the most politically correct guy out there.

So what kind of material did Borat pull out for the show? He didn’t disappoint in my mind. After Madonna’s performance on the show, Borat had this to say:

“That singer before me. Who was it? It was very courageous of MTV to start the show with a genuine transvestite, he was very convincing. It was only his hands and his testi-satchels that gave it away.”

With such outrageous comments, you’d think Cohen would eventually get in trouble with somebody and now he has. The Foreign Ministry of Kazakhstan has had enough of Cohen’s portrayal of their citizens as drunken misogynists who frequently refer to animal abuse as a pastime. Country officials are not ruling out legal action. Click here for more on this story.

I wonder what it’s like to be sued by an entire country?