At 11:59pm on Saturday night, my U-Pass will expire and I will have to join the unfortunate ranks of people who have to pay for transit each time they use it.

Of course, the year I graduate will be the first time that the U-Pass will be offered to students in the summer. Last year, we had to pay for transit during the summer months. This year, many of my friends still in grad school lined up this week to get their summer U-Pass.

If I really wanted to make the most use of my U-Pass tomorrow, I guess I could take the Skytrain way out to Surrey. That would mean, however, that I’d be out in Surrey. I think instead I’ll take the bus out to Safeway and buy some groceries. In the evening, I’ll use it again to go out for dinner. I wonder if I’ll be able to catch the bus home before midnight strikes and my U-Pass turns into a pumpkin. Maybe I’ll buy some bus tickets just in case. 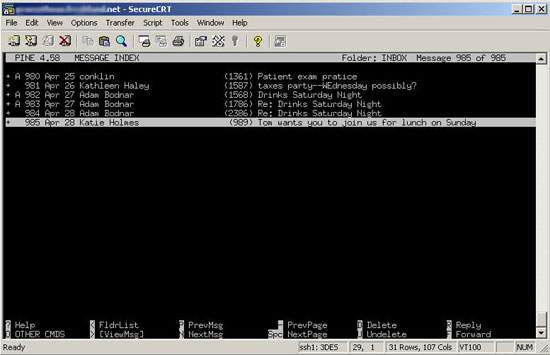 I bet most of you have an e-mail account. If you do, you probably use an e-mail client like Outlook, Outlook Express, Eudora, Thunderbird, or Mac Mail. I use something called Pine to access my primary e-mail account. Pine was the first e-mail client I was introduced to way back in 1994. I still like it for its simplicity and security. It’s virtually impossible to get a virus from an e-mail while using Pine. Oh sure, other e-mail clients have fancier features, but I like my Pine.

The one thing I don’t like about my e-mail account is the fact that my inbox contains nearly 1000 messages. I’m horrible at filing away messages into folders. Even though I have and use folders for school, TA stuff, and job related messages, my inbox is still pushing a grand. I keep a lot of e-mails because I always think I’ll need to them in the future, but I rarely figure out in what context.

For some reason, I feel a bit of shame when the inbox goes over 1000 messages. When that happens, without fail, I go and force myself to find a few messages to delete to bring it in under 1000.

Now that school is over, I want to go through my inbox and really do some housecleaning. Make new folders, delete messages from the penis pill companies, and just generally organize things.

I’m curious, how many e-mails do you have in your inbox?

About fifteen minutes ago, I was wondering what the hell I was going to write for a blog entry. I’m guessing writing a blog is a lot like feeding your kids… some days, you just don’t have the energy to do it. Then I stumbled upon a web site for a new game called Area 51. It turns out that David Duchovny and Marilyn Manson did some voice work for said game. Interesting.

Further research produced a somewhat bizarre interview of the two that was conducted by a gaming web site. Though the interviewer was present, he barely gets a question in and exerts a lot of effort to get them to talk about the game itself. What did they talk about instead? Here’s just a small snippet:

MM: It’s this Japanese gentleman who has a woman kind of make a fulcrum of her body-I use that word to make it sort of scientific-and he sits on her and he spins around.

DD: He spins around her?

MM: He spins around with his member

MM: In place. It’s one of the most impressive things I’ve ever seen. Frightening, somewhat. And he’s hairless.

DD: How does he maintain the flat spin?

DD: So he does it himself? That’s why it’s impressive.

MM: He dropped the Six-Minute Abs for the

DD: It’s the Helicopter Diet or something.

Did you know that two days after my last exam for my undergrad degree I was already in Honolulu, Hawaii? Yep, it was a family vacation thanks to Mom. It’s been a week since I finished my requirements for my graduate degree and I find myself in Port Moody tonight.

I am visiting my parents and sister in the self-proclaimed “City of the Arts“. After my interview today, I made the long trek out to boonie town. About that interview… I won’t say who it was with, except to say it was with a game development company whose initials are not “E” and “A”. It was probably one of the most casual interviews I’ve had in my entire life, which made it very hard to gauge how I did. I was asked when I’d be available, but I’ve come to learn such questions can be asked as an exercise. I usually have a gut feeling about how interviews went, but in this case, I can’t say one way or the other. I will have to wait this one out.

I bussed, Skytrained, and bussed it back to my parents place. I’ve said it before and I’ll say it again, it’s almost fascinating how the people on transit change as you move further east in the Lower Mainland. On my way out of the UBC bus loop, I was sitting next to this already well-tanned young lady who looked like she had come from a day at the beach. When I was on the final bus to my parents’ home, my seatmate was this middle-aged construction worker with a hardhat and a lunch pail.

After dinner, I went to Wal-mart with my sister. I drove for the first time in months but I didn’t seem to have any rust to shake off. It was like riding a bike… except you’re in a car. Along the way, my sister wished aloud that it would be nice if there was an Ethical-mart. I agreed but it would probably have $20 tubes of toothpaste. I went and bought my usual set of toiletries: toothpaste, toothbrush, and Gold Bond medicated body powder.

When we got back, I got all my family’s tax info for 2004. I once again got duped into doing my entire family’s taxes. I basically have four days to do it all, so I’ll be in a rush. On top of that, I’m still doing research assistant work for this prof. I have to get a bunch of stuff done for Sunday as well. For a guy who just finished his Master’s degree, I’m still doing a lot of work.

My parents are taking me out to dim sum tomorrow, after which, I’m heading straight back to my apartment to do work. I will talk to you then.

There’s no time for a long post tonight, Daddy has a job interview tomorrow that I’m still preparing for.

By the way, what is the right answer to the question above?

In the same grand tradition of my reporting of wang flies, comes another similar and equally disturbing story.

For those of you who haven’t done your taxes, here’s a little tip I learned from Eddy. If you made less than $20 000 last year (I’m talking to grad students mainly), you can use QuickTaxWeb for free. That’s a pretty good deal. I love finding these little perks for poor people.

For those keeping score, the mocha frap I had on Friday night did not do any damage to me (other than keeping me up until 5am). I’m actually thinking about having another one this sunny afternoon.

As some of you know, Frank has made it safely over to Japan and is now settled into his quarters in Science City. Not wasting any time, he’s started a blog. Go have a read and leave a comment. 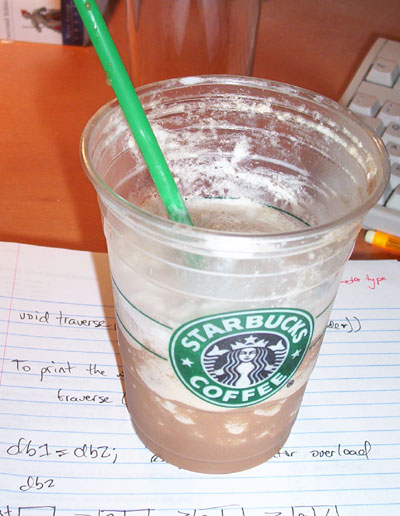 I’ve been reviewing old notes for most of the late afternoon and evening. Why? I think I’ll leave that for a separate post this weekend. After being cooped up in my room for so long, I decided to get some fresh air and take a short walk over to my neighbourhood Starbucks. It was time to get my first mocha frap of the season.

Now, if you’re a long time reader of erwintang.com, you’ll remember that I’ve had an interesting history with mocha fraps. I enjoy the treat, but not the ocassional gastrointestinal disagreement that occurs afterwards.

It’s been about half an hour since I’ve finished my calorific treat and so far, I’m doing ok. Let’s see how I do in the next little while.

I did indeed take the day off today. I woke up earlier that I had anticipated and could not fall back asleep. I hate when that happens.

Upon rising, I saw that it was another beautiful day on the west coast. After “breakfast” I headed downtown. I needed to buy a video game for research purposes (I swear that’s the real reason). I hadn’t been downtown in a while. The nice weather made shopping quite a pleasant experience. Thumbs up! I also had lunch downtown. For those keeping score, it was a Teen Burger.

After returning home, I took a most quick nap. It needed to be a short nap because I was going to toss the ball around with Adam at SJC. When I arrived at the courtyard, Carolyn was there. We all played a fine game of catch. Carolyn has a much improved arm now. Yay! She had to leave soon after I arrived to meet some friends at the pub. Adam and I were left to continue on our own.

One time after throwing the ball to Adam, I got distracted by some girls walking by SJC sidewalk. Adam, not knowing I was under a hypnotic spell, threw the ball at me. It hit me square in the left shoulder. Luckily, he had not thrown it hard and it surprisingly hit me in a place that didn’t hurt too much. Nevertheless, I went down like a ton of bricks. Adam rushed over and apologized profusely. Little did I know I would inadvertently give him some pain later.

After dusting myself off, we went to dinner which consisted of pasta. I had organic pasta for the first time. It was… interesting. After dinner, we went to Koerner’s to see Carolyn. It was a short-lived visit since it was time for hockey.

At hockey, I totally by accident slammed my stick into Adam’s shin. The ball was loose around us, we were both twirling around, I found the ball, and decided to whip it towards the net. Bam! Man, that must have hurt like sumabitch. Like way more than getting hit in the shoulder by a softball.

Ok, I need to drink some water now.