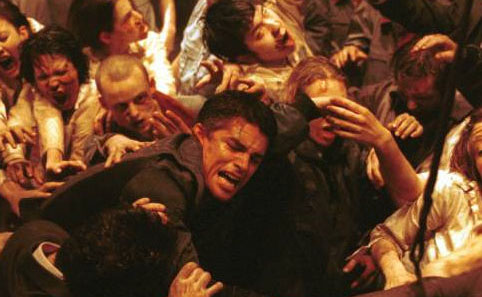 For many years now, I’ve had an interest in zombies. I think this stems from living on-campus. While UBC is a bustling mini-city during the day, it gets pretty deserted during the evenings and early morning. As a person who stays up late on a consistent basis, I’ve been around campus when it truly feels like you’re the last person on the planet.

When I lived at SJC, I’d visit the vending machine quite a bit during the late hours. As I lived on the first floor, I’d have to briefly exit one wing before entering another to get to the machine. For those few seconds I was outside in the darkness, I’d always wonder, “What if there’s a zombie waiting for me out here?”

Of course there never is, but you know what? For some reason, I feel pretty confident I could survive a zombie attack. Perhaps it because I’ve watched a few zombie movies in my time or I’ve played a few zombie based video games as well. It certainly isn’t because I’ve read any zombie survival books. It’s just a gut feeling.

There are, however, certain conditions on this confidence. The list is as follows. First, I definitely need a weapon. I doubt that anyone could survive for any length of time without having some way of defending themselves against the living dead. I’d prefer a long range weapon, not necessarily a gun, perhaps even a crossbow. Of course, I’d also want a decent supply of ammo to go with that weapon (if applicable).

Second, I’d need to be in a fortified building. Several buildings on-campus would be ok for this, some better than others. I’m pretty sure you’d have to surrender the ground floor in some cases, but as long as you can hold them off in the staircases, you’d be fine. Of course, this means you’d be essentially stuck in that building, but maybe that’s what you want. As example, I think if you were in SJC, you’d definitely have to surrender the whole first floor. Way too many windows and access points on the first floor. Let ’em have the pianos.

Third, you’d need food and water. While zombies can traditionally get away with eating just brains, we need bottles of Dassani and bars of Oh Henry. This is especially important if you’re going to hole up somewhere.

Fourth, and this is a biggy, the zombies have to be old school zombies. This means they just want to eat your brains and can only move a fraction of the speed of the living. None of this 28 Days Later and Dawn of the Dead 2004 stuff. Those zombies can run at full speed. Combine that with their superior numbers and you’d be in serious trouble. I suppose though if you manage to hole up somewhere, their speed wouldn’t matter. It only matters if you were out in the open with them.

If the dead began walking the earth, where would you go and what would you take with you? Before I finish, I leave you with the zombie infection simulator.