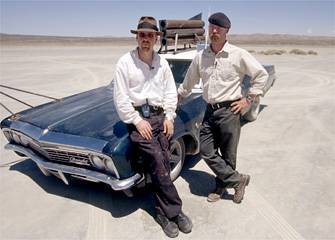 If you haven’t seen it before, I suggest you watch an episode of Discovery Channel’s Mythbusters. The show has quickly become appointment television for me. Mythbusters’ two main hosts are Adam and Jamie, who were in the special effects industry before they started working on the show. Adam is goofy by nature, which plays well against straight-laced Jamie. Fans often point towards their relationship as one of the most appealing parts of the show.

Another thing great about the show is that they always mix one part science with one part entertainment when they investigate the myths. The guys will take the myth to the next step if necessary, often just to see if they can make something blow up. That’s part of the appeal. Some of the questions they’ve answered are pretty cool. Can you kill someone with a bullet made of ice? Can jumping at the last second save you in a runaway elevator? Can you make a cannon out of a tree? Can you kill yourself urinating on an electrified rail?

You can view some clips here on-line. Mythbusters is on almost everyday of the week, so check the program guide for the times. Alternatively, you may download episodes using Bittorrent, but don’t tell anyone I said so. If you’re rich, the best way would be to purchase the DVDs.