UPDATE: I hope everyone is enjoying the Olympic Games in London! I originally wrote this post in 2004 for Athens. Currently, there’s quite the talk about the Dutch women field hockey team. Judging by the visitor logs for this site, a lot of you are big fans of women’s volleyball!

Maybe it’s because I was under a rock during the last few Summer Olympics, but when did the Games of the Olympiad get so focused on sex appeal? I know the Olympics are now very much tied into TV ratings, but it appears choices are being made just for the sake of sizzle and flash, rather than pure athletics.

First up is, of course, beach volleyball. Granted, the outfits the women and men wear on the sand make perfect sense. It’s the beach, why wouldn’t you play in bathing suits? I would argue it’s probably the only Olympic sport where sexy and practical outfits are the one and the same. In Athens though, they’ve introduced those official Olympic beach volleyball dancers. They can already be found on the pro circuit but this is the first time they’ve appeared at the Olympics. Do they make the event more athletic? No, not really, but I don’t think anyone is complaining. This post would be incomplete if I didn’t offer some visual evidence of what I was writing about.

Next up is women’s volleyball. In North America at least, I’ve always seen women play volleyball in the standard garb of tight shorts and sleeveless shirts. You gotta admit the shorts are kinda sexy, but beyond that, I think it’s quite a respectable and practical way to play volleyball. The European and South American teams seem to prescribe to a different style of dress however. Pictured below is the Greek women’s volleyball team. They’re wearing tight, one-piece uniforms that appear to be made of Spandex. Is this really necessary? They’re essentially wearing a one-piece bathing suit to play volleyball inside. At least with the shorts, the women are covered down to the upper thigh, with these things, their asses are all hanging out. I’m surprised people don’t talk about this more. Don’t get me wrong though, I’m not about to write the FIVB and ask them to change the uniform standards, I’m just wondering. 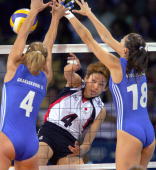 Next up is women’s basketball. You might be thinking, how the hell can basketball be that sexy? I thought that too, but then I started watching basketball in Athens. From watching the WNBA and NCAA basketball, I always thought the women just wore what the men wore in games, the standard basketball jersey and loose, long shorts. Both the men and women uniforms were basically interchangeable. Well, wasn’t I surprised when I saw what the Australian women were wearing. They were sporting these tight, one-piece uniforms. I suppose this makes them distinguishable from the men’s teams, but is it really necessary? Does it help with shooting and lay-ups?

I guess I could theorize that either women want to wear these type of outfits for their sport or that they need to draw more attention to their sport. I wish all sports could stand on their own for what they offer in terms of athletic displays, but that’s not reality. Between bathing suits in volleyball and glowing pucks in hockey, it’s about image in the end.

2 thoughts on “THE SEXY OLYMPICS”