You have to admit, there are some similarities. 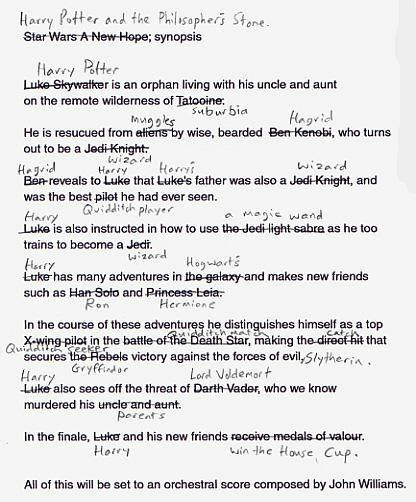 I know I wrote that the Flames would win the Cup in game six, but I still think they’ll do it tonight. Fate and will are still on their side. Once again, I begrudgingly accept that the Calgary Flames will be the 2004 Stanley Cup champions.

This evening my friend Pat and I were walking a mutual friend of ours back to his lab. After we dropped off Adrian, we took a small walk around the Forestry building. I was getting hungry. Pat suggested we just go to McDonald’s to pick something up. I know their food is bad for me, but I agreed nonetheless.

When I got there, I ordered a two-cheeseburger meal to go. We arrived back at SJC and retired to our separate rooms. I grabbed one of the burgers and threw it in my microwave to heat it up. I wanted it to be nice and toasty while I watched the 11pm news.

I sat down at my desk and unwrapped my cheeseburger. I had my eyes on some sports highlights when I bit into the burger. It tasted fine, but I detected something was missing. Being a veteran consumer of burgers, I knew something was not right. I looked down at my food. The burger was awfully thin, even for a McDonald’s burger.

I carefully opened my burger to reveal its contents. There, I found ketchup, mustard, onions, a pickle, and a slice of cheese. The supposed “meat patty” was nowhere to be seen. I was dumbfounded. I ran over to Pat’s room to let him look at it. Adam was in the hallway and I showed him as well. I said there was no way the other burger was missing the meat as well. We went back to my room.

I grabbed the other burger and opened it. Same damn thing. No meat. I was mad. I walked all the way to the Village to essentially get two cheese sandwiches with some ketchup and mustard. You want proof? Look below. 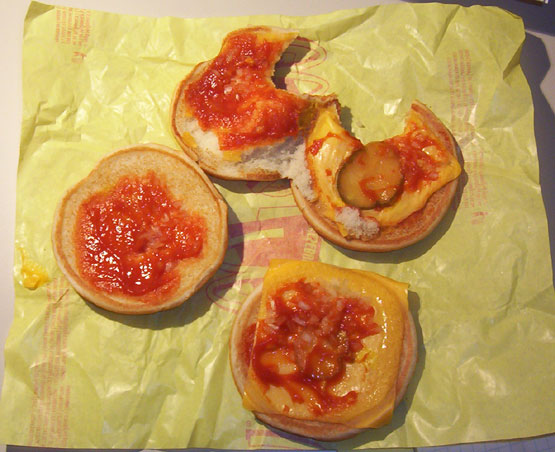 If you know me at all, this type of consumer shenanigans is right up my alley. You can bet the farm I’m calling up McDonald’s Restaurants of Canada tomorrow morning. It’s going to be fantastic. I can’t wait. I am wondering what type of response they’ll give me. I don’t think they’re stupid enough to make excuses, but it intrigues me what they will say.

I will keep you posted on this one.

As a web site that is freely accessible to anyone on the Internet, sometimes I feel I have an obligation to use this forum to make the world a better place.

In light of this, I think everyone should watch this special message.

After Tampa Bay’s rousing victory last night, several of us quickly organized an informal LAN party. We had more people this time, I think we got eight people to play, rather than the six last week.

Again, it was lots of fun. There was running and even some gunning. We tried out a whole bunch of different maps that took us from small French towns to the city of Stalingrad.

So, while it was a great way to spend my Saturday evening, I always hate the way I feel after it’s all done. I feel dehydrated. For some reason, my room seems messier that before I started. I feel hungry and there’s never any food in place. My legs feel cramped. I stink.

I think the key is to not stop playing, but to maybe limit my playing time to maybe two hours or so.

Ok, I gotta go clean this place up now.

I came to the stark conclusion last evening that the Calgary Flames will win the Stanley Cup on Saturday night.

I’ve been watching hockey since I was five years old. I’ve seen countless games. I’ve watched playoff series come and go. I’ve witnessed stars in the making and legends retire. After all this, I like to think among the unpredictablities of sport, there are certain things you can count on.

The first is to never discount the power of will. I believe the Flames have won several games on sheer will. They just wanted to win more than the other team, regardless of skill level, injuries, or common sense.

The second thing is the power of fate. I know it sounds weird to be talking about both will and fate. They seem mutually exclusive. If you’re willing something to happen, then it’s really not fate is it? My belief is that will alone can’t get things done. I’m trying to get a lot of things to happen in my life right now, but I know for sure I won’t get all of them. Fate is the final ingredient that tips the scale one way or the other.

The power of fate is behind the Calgary Flames. They are the Canadian team that shouldn’t have gone this far. They are the team with the wrong players to be in the final. Given their rocky start, they should not have had their success thus far.

Considering all this, it would be a slam-dunk then, that fate would rally behind the Flames. Also consider the fact that the Flames will be playing game six at home. There is no better way to win the Cup than in front of your fans.

So, as I finish this post, I begrudingly accept that the Calgary Flames will be the 2004 Stanley Cup champions.

This article is a good read. My favourite quote is below:

“The good men are all married,” writer Junko Sakai says. “Those left behind are all nerds or without jobs or violent or not nice-looking.”

Well, today I had my first softball game of the season. I am on the SJC team. It took only a single game for us to nearly get into a fight.

I do not have the energy to explain what happened exactly. It will suffice to say that it’s ridiculous that another team should get angry with us just because we know the rules and they don’t.

I will also say old guys seem to have the chippiest attitudes in the entire league. I don’t know if it’s because they’re old and ornery, but they sure do like to spout off.

The other team had this old guy today. He’s a prof and probably emertius by the looks of it. Anyways, his team was in violation of a rule. I spoke out aloud about it. He made some smart remark about it and rolled my eyes at me. Hey, I know the difference between being annoyed at a rule and being annoyed at me. He was clearly annoyed at me.

Then later, one of our runners hit the bag the same time the throw came in. Everybody and their dog knows a tie goes to the runner. He called it out. I was stunned at the audacity of his call. We let it go even though he was clearly wrong. I will say one thing about SJC teams, you can always expect us to take the sportsman approach to things.

At this point, however, I decided that if things got a little more heated out there, and everyone grabbed a partner, old man winter there would be at the top of my list. And before you start berating me for targeting an old man, he was at least a foot taller than me. Plus, I think he had really sharp fingernails. I’m pretty sure he’s a hairpuller too.

Things did not get any more cordial and one of our players exchanged some words with the other team. Back on our sideline, I had to this to say to him.

“Um, I didn’t think I had to say it this early, but if anything happens, I’ll jump in and I’ll get your back. You can count on me.”

It’s ridiculous to even think about physical altercations in what is supposed to be a recreational league, but assholes permeate throughout society. That’s a lesson I’m going to teach my kids early on. Nonetheless, it’s important to let your teammates know they have your support.

In the end they scored more runs than us, but I don’t care. This is a recreational league. There is no trophy or medal for winning the most games. The last place team gets as much hardware as the first place team… which is nothing at all.

What you’re supposed to get out of this is exercise, fun, and cameraderie. Despite not scoring as many runs today, we did get all of those things. After the game, our team ate dinner together at the same table and discussed what had transpired.

Notice I keep mentioning they scored more runs than us and not that they won. Why? Because the way we handled ourselves today, I think we were the ones that triumphed.

And oh, mouthy old man, I have a double-play ball with your name on it.

Almost a year after my trip, I’ve finally put up my pics from my trip to New Orleans. Man, I’ve been lazy with some of my pictures. Anyways, I didn’t take any pics while I was at the bars. Unfortunately, that means no visuals of my old drinking buddy Andy.