Well, you knew that I would have to comment on the news release about the mutant baby that was born in Germany.

The little boy, is normal in all respects, except that his body blocks the production of a protein that limits muscle growth. The result? Abnormally large development of muscles for a human being of his size and age.

Testing has revealed that the cause of this super muscle growth is a mutation in his DNA. Of course, when I read this, me and millions of other comic books geeks thought one thing, “Holy crap, this is the X-Men come to life!”

The X-Men are the wildly popular comic book and now movie franchise. In it, the heroes possess fantastical powers and they are referred to as mutants. The powers are revealed to have come about from mutations in their DNA. Which is exactly how the little boy’s super strength is explained!

So, do I think this little German boy will grow up, don a body-hugging costume, and fight crime? Probably not. First, most mutant superheroes fight crime in a team, and as far as I know, he’s the only certified mutant with a useful mutation on the planet. Second, the way society is these days, I doubt he could hold down a steady job and fight crime. There’s just not enough hours in the day. It might work if the German government sponsored him as some sorta federal superhero. That just sounds scary though.

The likely scenario? He’ll probably have it rough throughout his teenage years, but in his twenties, he’ll find his true calling as an insurance salesman.

On that note, let me put up a picture of Wolverine, one of the X-Men. 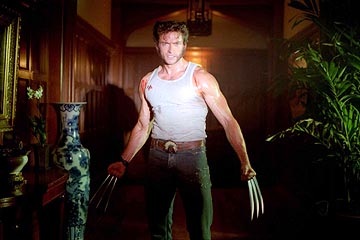