A few weeks ago, one of my speakers for my computer system fell off the ledge it was sitting on and hit the floor. It was the never the same again.

I shook it and didn’t hear anything moving inside the enclosure. Unfortunately, while no parts had been dislodged, the speaker began to hiss static. It was most noticeable when I played my DVDs. It would drown out dialogue. HISSSSSSSSSSSSSSSSSSSSSS

It was the right rear surround speaker in my 5.1 system. You really can’t have your right rear speaker dominating every other one and hissing noise.

I decided to open up the speaker enclosure to take a look. I was hoping maybe a soldered joint had broken or something. Alas, it was not to be. All the joints I could see were solid. There were no circuit boards to speak of. The damn thing was broken and I didn’t know how exactly.

I saw two, well three ways really on how I could deal with this situation. First, I could get a replacement surround speaker from Creative. I’ve sent them a request for pricing, but they haven’t gotten back to me yet. Second, I could just get a new set of speakers. This option makes no sense whatsoever. If I were to get a new set, I definitely would get a better system. I have my eye on a set from Logitech. They are the cheapest set of THX certified speakers on the market today. 280 Watts (RMS) of sweet sonic power. I can get them for about $200. If I were to get a new set, the best thing (logically) to do would be to purchase similarly performing system. In that case, I’d be spending around $85 for a piddly 50 Watt (RMS) system. The third option would be to do nothing. Just forget about doing anything. While watching DVDs, I’d no longer hear any ambience from the right rear. While playing games, monsters could sneak up behind me on my right and I wouldn’t even know it. While listening to music, I’d be down one speaker. I’d get a little less William Hung coming out of my room.

I’m still not sure what I’m going to do. In the interim, let’s take a look at another speaker system. 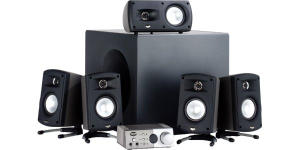