I was going through some files on the old hard drive tonight. I found a picture I took when I had the LCD projector for my lecture here at SJC. They give you the projector the day of the talk and you get to keep it almost twenty-four hours.

Of course, I had to try out some DVDs, and it did not disappoint. In a perfect world, every room here at SJC would have an LCD projector mounted in the ceiling.

Take a gander at how movies look at my wall. A prize goes to the first person to correctly identify the movie I was watching (it’s a gimme). 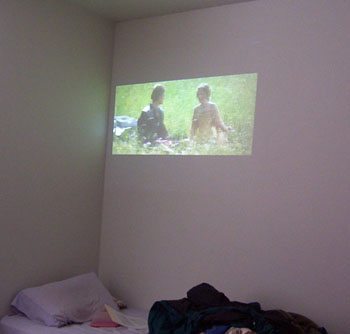