I’ve been working hard (at least for me) for the last couple of days. I think if I put in a good day tomorrow, I’ll be where I need to be. If I were to describe it as a commercial airline flight, I’m just finishing my climb towards cruising altitude. I’ll need to put some work to keep the bird in the air, but not as much work as I needed to take-off.

I could have worked until 4am, but around 2am I said, screw it. I’m tired of working until I had to absolutely go to sleep. It leaves me with a disatisfied feeling before I fall asleep. Like the whole day was put towards work, with patches of procrastination here and there, but never really having time for me.

So, for the last hour or so, I’ve been working on my site. Before I show you the fruits of my labour, let me tell you about my weekend thus far.

On Friday, I had a chance run-in with my good friend Marcia, or now more correctly, the new Mrs. Marcia George-Clarke. Anyways, she was in the middle of errands, so she asked me to walk with her while we talked.

Her first errand? To get her U-Pass. Um, ok. I follow her down to the base of Koerner Library. I’m wondering if Murdoch’s sister is still down there. I walk into the U-Pass room and there are shouts from behind workstations.

Marcia turns to me with a confused look. Murdoch’s sister is indeed still working. Except it appears she has told all of her co-workers about me and my site. The guy next to her has a laptop computer. He turns it around to show me what’s on his screen. It’s my site. For some reason, I’m feeling quite shy at that moment.

Some other U-Pass girl comes up to me and says hi. “Hey, that intro to your site? Nice… I like the part about you not having a girlfriend.”

Meanwhile, Marcia is getting her U-Pass processed, and I’m kinda hiding behind her while all the U-Pass workers look at me.

Unfazed, Murdoch’s sister is explaining to some other people what they can do with their U-Pass, she ends her spiel with, “and don’t forget to visit erwintang.com”.

Marcia grabs her U-Pass and starts to leave. I say goodbye and nice to meet you to all my new friends in the basement of the library.

Outside, Marcia makes me sit down on a curb.

“Ok, you need to explain to me what the hell that was all about.”

I tell her the whole the story. She seemed somewhat amused.

Later in the evening I went to my parents’ place to pick up some stuff. I spent the night there. I totally forgot it was their anniversary last week, so I took them out to dinner on Saturday night. I’m such a good child.

So, that brings us to here; and the work I’ve done on my site.

Lastly, I feel really bad that I have three sets of digital photos on my HD and they’ve not seen the light of day on the Internet. These sets cover my trip to New Orleans, the 2003 SJC Welcome Dinner, and Nic and Marcia’s wedding. I will eventually put these photos up, but here’s a sample of things to come. 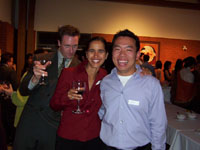 That’s enough work for one night, I’m going to play a game, watch TV, or clean my fridge before I go to sleep.