This week in LA, the annual Electronic Entertainment Expo (E3) is being held at LA Convention Center. This is the video game industry’s biggest showcase.

Like clockwork, every year a former co-worker of mine, Anthony Ahamed goes to E3 where he takes lots of photos. Tony is kind enough to let me host his photos on my site. You can see some of his work from 2001 and 2002.

Last week, one of the subjects in Tony’s photos actually e-mailed me. She found my site when she was looking for E3 photos. Tony is standing with her and her best friend. I noticed that she had some C++ code on her shirt, but I couldn’t make it out. Here’s the photo below: 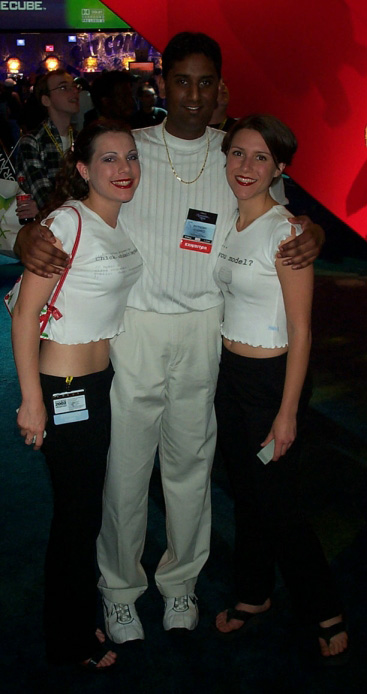 Anyways, Kimberly on the left sent me an e-mail and revealed what was on her shirt. The code is as follows:

She was working for a recruitment firm and code tells programmers to submit their resumes to her. I’m assuming that Chick is a pointer to a CCuteChick object.

Anyways, this is the first time a stranger has contacted me because their photo was on my site. A milestone for sure.

By the way, Tony will unfortunately not be at E3 2003 this year. He has decided that other places are worth visiting as well! Rest assured though, many other web sites will have E3 photos to no end!