THE MOST UNDERRATED SCENES IN MY DVD COLLECTION

I was looking at my DVD collection tonight and I was thinking how some scenes in movies I really like, but no one else seems to think that way. Well, some of them have universal appeal, but other scenes for the most part, go unmentioned.

So, here I present, the most underrated scenes in my DVD collection…

I love the scene where the Terminator, John, and Sarah have retreated to the camp near the Mexican border. The Terminator and John are engaged in a lesson of high-fives, while Sarah watches. We hear her thinking in a voice-over that goes something like this…

Watching John with the machine, it was suddenly so clear, the Terminator would never stop, it would never leave him and it would never hurt him, never shout at him or get drunk and hit him or say it was too busy to spend time with him… it would always be there and it would die to protect him… of all the would be fathers than came and went over the years, this thing, this machine was the only one that measured up… in an insane world, it was the sanest choice…

While this movie will be forever be remembered for its special effects and action sequences, I’m really glad that James Cameron inserted that little piece of dialogue. It gave the film a heart. It wasn’t sappy or melodramatic, but it was just enough to make you realize the whole movie wasn’t about a liquid metal machine.

This film was probably one of the best movies of 90s. I was totally unprepared for it when I saw it. The ending absolutely surprised me and kept me thinking about it for several hours afterwards.

One of the best scenes isn’t really underrated, but I still love it. Near the end, John Doe, Detective Mills and Somerset are in the field. Somerset has just run over to tell Mills to drop his gun. Mills is pleading for someone to tell him what’s in the box.

Between this movie and Fight Club, those would be Brad Pitt’s best movies to date.

The Hunt for Red October

This film ranks as one of my all-time favourites. It was the first submarine movie I had ever enjoyed and the first Tom Clancy-based project to be made. In my opinion, Alec Baldwin was the best actor to portray Jack Ryan. As popular and rich Harrison Ford is, he never did convince me he was everyone’s favourite history professor and sometime CIA analyst. Don’t even get me started on Ben Affleck.

Anyways, one of the best scenes from this movie comes when the Red October has just set out to sea. Captain Ramius (Sean Connery) has given the orders to his crew and everyone starts to sing the Soviet national anthem. The singing is disjointed and off-key, sounding just like how normal sailors would sing. Soon, the sonarman detects an American Los Angeles class submarine behind them. Ramius decides to let the men continue to sing. At that exact moment, the soundtrack changes from untrained voices to an obvious mens’ choir, which procedes to beautifully sing the next few verses of the anthem. A powerful moment.

Up until that point, I had never seen a movie where Soviet military personnel were being depicted as proud and decent warriors. From then on, I cared about the characters on that submarine. 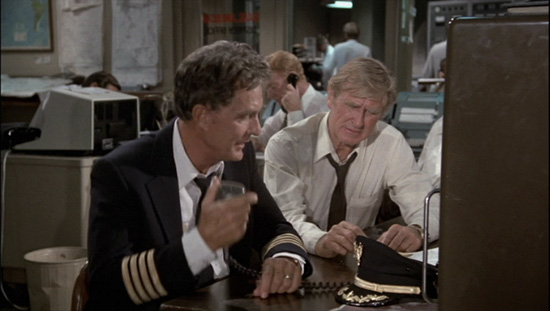 This film is one of the funniest in the history of cinema. Still standing up to the test of time, nearly all the jokes are as funny today as they were over 20 years ago when Airplane premiered. The jokes come quickly in this movie, if you didn’t laugh at one, the next one would be seconds away.

There are many quality moments to chose from but the one that stand out in my mind is when Captain Rex Kramer (wonderfully played by the late Robert Stack) is trying to talk to Ted Striker (Robert Hays). Before doing so, Kramer tells the tower crew he wants to build up Kramer’s confidence and given him hope that he can land that plane, this will be the only way in his mind to save all the people. Finally, he gets on the horn and asks Striker if he’s ever flown a multi-engine plane before. Striker says never and Kramer immediately says (and with the transmit button still depressed)…

Shit… it’s a goddamn waste of time, there’s no way he’s going to land that plane. Route him into Lake Michigan, at least it will avoid killing innocent people…

It’s not as funny when you read it because the way Stack says shit is just priceless. You have to listen to it for yourself. If you listen to the directors’ commentary, they say that a few of the more mainstream actors didn’t get the movie and gags at first. They were asking them why they were saying this or why this was happening. According to the directors though, Stack got it from day one. A fine performance from a career filled with fine performances. 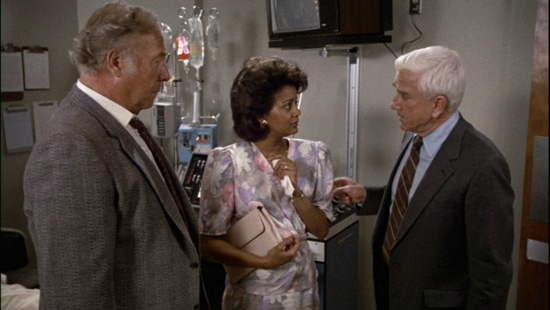 This movie is cut from the same cloth as Airplane which isn’t surprising since much of the same people were responsible for both movies. This film single-handedly revived Leslie Neilsen’s career and gave him a chance to be seen by a whole new generation of people.

There were many scenes to choose from, but the one I chose is from the beginning of the movie. Frank (Nielsen) and Ed (the wonderful George Kennedy) are in the hospital visiting their injured colleague Nordburg (O.J. Simpson… yikes…). While there, they attempt to comfort Nordburg’s wife Wilma. Frank comes up with this gem of a line…

Wilma, I promise you whatever scum did this, not one man on this force will rest one minute until he’s behind bars… now let’s grab a bite to eat…

That’s just too funny. There is a scene that’s a close runner-up but it involves the directors’ commentary so it doesn’t really count. At the beginning of the movie, O.J.’s character is sneaking around at night in a black knit cap, black sweater, black pants, and black shoes. If you know anything of his murder trial, this was perhaps art imitating life. Anyways, during this scene with O.J. skulking around, one of the directors says, “Wait, are we watching the movie still or is this from real life?”

The rest of the panel bursts out into hearty laughter. It wasn’t a very PC comment, but funny as hell.

This was the movie that truly sent Bruce Willis from just a TV star to a movie star. I could have picked from a litter of great action scenes, but I chose one that had no action.

In this scene, McClane has procured a walkie-talkie and is trying to explain to cops what kind of terrorists are in the building…

The pause before cigarettes is long and he does it because he thinks he hears something. What’s great is that we never hear what he thinks he hears nor does the shot break away to what possibly might have caused the sound. They just continue to hold on Willis for several long seconds with no dialogue. In a normal paint-by-numbers type action flick, if our hero hears something, usually that something is really part of the story. The director then feels the need to show the audience what caused the sound or how that sound just might be something innocent or a bad guy waiting.

I just found it neat that there was nothing there at all and that the director thought it ok to stop the film for several seconds for essentially nothing.

This movie holds a special place in my heart. When I saw this movie for the first time, I was so envious of those kids because they were going on the adventure I so badly wanted to go on. They got to run around without their parents, outwit bad guys, explore underground caverns, and find pirate treasure. The kids were so funny too. I loved Chunk.

After several years of serious petitioning by grown-up kids like myself, Warner Bros. released the movie on DVD. It’s an excellent disc with this cool feature when you can see the kids all grown-up watching the movie with you and making comments.

Anyways, one great scene occurs when the Goonies have busted into this restaurant which was really the hideout for the bad guys. Mikey fakes wanting to go to the bathroom and Chunk proceeds to advise him with…

I always thought this was funny because I personally hate going to the bathroom in digusting bathroom. Well, who does really? However, I really hate it when they’re insects around. When I heard Chunk say that line, I was like, “Wow! You mean I’m not the only one who doesn’t like peeing when there’s this huge daddy longlegs in the corner near the toilet!”

The movie that started the whole Austin Powers craze is chock full of funny gags, and in my opinion is the best of all three films.

One of my favourite jokes actually spans several scenes. Near the end, Austin and Vanessa split up to thwart Dr. Evil. Austin has this oversized golf cart and he needs to drive it back down a corridor. It’s facing the wrong way and instead of reversing it all the way down, he chooses to turn it around. The problem is that the corridor is really narrow, so he has to go forward, turn the wheel, reverse it, turn the wheel… and so on. This in itself is pretty funny but about two scenes later, we come back to Austin, and he’s impossibly managed to get the cart wedged in perpendicular to the length of the corridor. Hi-larious!

Two of David Fincher’s movies make this list. Fight Club is also a great movie. Nearly everyone knows about the line about the rules of fight club… blah, blah, blah… but one of my favourite scenes occurs when Jack first “meets” Tyler on the airplane. They talk but then Tyler has to leave to go to the bathroom. As he gets up, he says…

Now a question of etiquette… as I pass, do I give you the ass or the crotch?

I thought this was a clever line. I had never heard of it before. I’m not sure if novelist Chuck Palahniuk came up with it or if it’s just something people say. What I do know is that my sister also loved the line and has used it on several flights herself.