Frustrating as it is, my mail is down again. Please use erwin@interchange.ubc.ca until further notice. Thanks.

I was in Arash’s room last night and he showed me some of the pics he just got developed. I got bored and scanned some of them in. 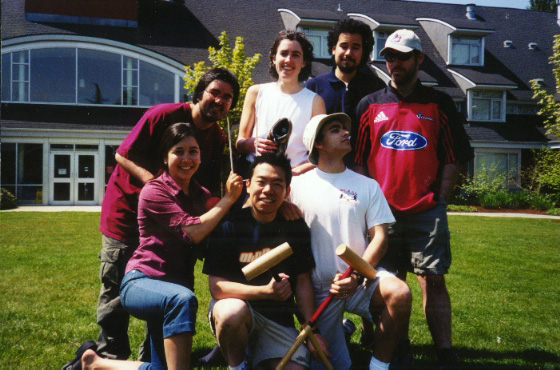 This was taken on the SJC Sports Day. I didn’t play in the croquet tournament, but they let me take a picture with the players. Notice the crossed mallets. 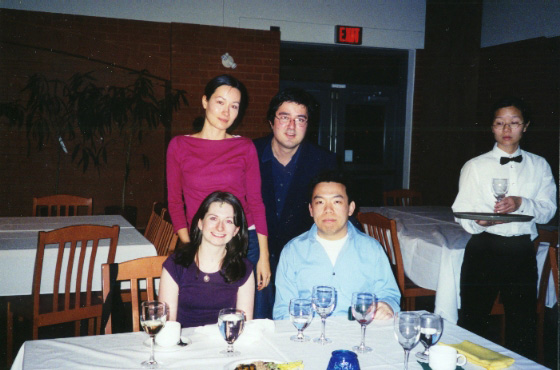 I’m not too fond of this picture. This was taken during Spring Dinner. I looked kinda stunned or lost. I’m sitting next to Stephanie. That’s Arash and Evelyn behind us. 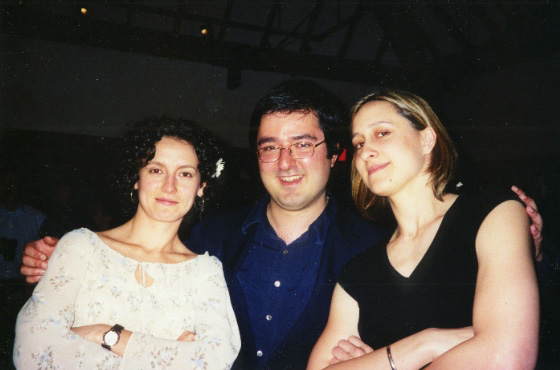 This picture made me laugh. Arash is more than pleased to having his picture taken with two women. The women, however, seem to only be tolerating his presence. Go Arash go!

MAIL IS TEMPORARILY DOWN

UPDATE : Aaaaaaaaaand my mail is again down. Not sure when it’ll be back up.

Once again my mail server has a full hard drive. So from approximately 4pm on Thursday, I probably won’t get any incoming mail. If you sent me anything after that time, please re-send that message to erwin@interchange.ubc.ca until further notice. Thanks.

I have a throw-away Hotmail account I use whenever I need to sign up for anything. I check it every couple of days to clear it out and to see if anything relevant has come in. I don’t conduct any personal correspondence with it, nor do I give out the address to people.

A few days ago, I received a non-spam message. The text of that message is as follows:

I’m not sure if I’ll go water running this afternoon but maybe in the next couple days during public or university swim hours, John said that they have short periods in between the races.

Lets go for some underwaterrunning or a bike ride in the next days. I’ll write you an e-mail or you can give me a call, 604-222-xxxx.

For starters, I don’t know any Andreas’… well at least I don’t think I do. Also, I don’t know anyone named John. Now as random as e-mail can be, look at the phone number that was left, the area code is 604 and the prefix is 222. That’s a Vancouver number and more specifically, a prefix for in and around UBC. Adding to the puzzle is that when I traced the IP back, I got the address of an AMS computer, which meant it probably got sent at one of the public terminals in the SUB.

Was it by totally random chance that someone sent me an e-mail by accident, and we both just happen to be in the same city and we both are involved with the same university? Or is there a thread of commonality between us?

I’m kinda tempted to call that number, but I bet it would get uncomfortable. Andreas, if you are reading this by some odd chance, please contact me!

AND THE WINNING WAYS CONTINUE…

I’m tired, but I’ll make this one last post before I go to bed. As some of you know, the last SJC sports team I played on was not so hot in terms of it’s winning ways. Our men’s ball hockey team went oh-for eight or something like that. We were outscored approximately 160-10.

Summer has led us to the Graduate Students Society summer sports league. After thoroughly enjoying several sessions of catch with some of my fellow SJC residents, I decided to form a softball team for the GSS league.

My team is a bit lean on players, but that just means that our batting line-up isn’t huge and everyone gets to play when we’re out in the field. Also, the people on this team for the most part weren’t on the ball hockey team. Last but not least, there are girls on this team. All signs pointed towards a half decent team.

Well, today we had our first game. We lost 19-6. We actually were winning for the first two innings, but we just let it get away from us. We weren’t as sharp in the outfield and our bats fell silent.

To make things worse, two of our players nearly broke their hand on separate plays. I was one of those players. In the first incident, Francois was charging hard for a fly ball and it was coming in hard. It came in at difficult angle and he took the ball (it felt like a hard ball) directly off his hand. He had to leave for about an inning or so, but he sucked it up and played on.

On my play, I basically did the same thing. I came in hard to get a ball in front of me except it was off to the side a bit. Unfortunately, it was coming in off my non-glove side and I instinctively tried to barehand it. Dumb idea. It slammed into my thumb and index finger on my left hand. I managed to toss it to my cut-off man but my thumb and finger stung like crazy for the whole game afterwards. I seriously thought it was broken for a minute, but I gathered I would be in a lot more pain.

I think I just bruised it, but the whole area is still a bit sore. Francois is alright too and we should be ready for next week’s game.

I know we had fun today and all, but I hope this isn’t the start of another oh-for season.

Last week I interviewed for a job on campus that I dearly wanted. There’s a computer lab on campus that needs an assistant for the summer. I thought I was perfect for the job. They needed some work on a web site, plus I had to help people of all ages (kids and seniors) with running applications. I like helping people and I know a thing or two about computers. Sure, I don’t have the best design skills in the world, but hey, you can read this can’t you?

I thought I gave a great interview and brought across all the points I wanted to make. They interviewed only a handful of people and I was sure I was a strong candidate for the job. They let were going to let me know at the beginning of this week.

On Monday, I was hoping dearly that they would call. People use the phone to tell people they got the job. Rejections are saved for e-mail and the mail. Around noon, I got an e-mail. They had picked a candidate other than myself. I admit I was crushed for about an hour. This was going to be the perfect summer job. A five-minute commute, good hours, and doing something I could enjoy. I’m still not sure what I could have done better. Maybe my design skills were lacking. Maybe I didn’t say the right thing here or there. I will never know.

Anyways, about an hour later, I realized I had to get right back into the saddle and continue looking for a job. Taking time to lament wasn’t going to get my any closer to employment.

I know that perhaps five to ten people read this blog (ha!), and maybe you could help me out. Do you know of any summer jobs? I’m willing to do pretty much anything. I came up with this line to illustrate my desperation… “I’ll wash butt-holes…”

I’ve decided that I like having brunch on Sundays. If you know me, that might be surprising since you’re probably thinking I like to spend most of my Sunday mornings asleep.

Hell, that’s how I like to spend all my mornings, let alone Sunday mornings. Suffice to say, it’s a struggle for me to wake up that early to get off campus for a morning meal. Before this school year, I don’t think I’ve ever had brunch before.

The first time was in December, and we were off-campus by 10:30am or so. The whole time I was thinking about how many people back at SJC were asleep. After a long wait, we wound up at Sophie’s Cosmic Cafe. Brunch was alright, and I think I made some comment about the eggs being better at Denny’s. Afterwards, I felt like someone had just kicked my ass and I took a nearly three hour nap. I woke up just before dinner.

The second time I went to brunch was a few weeks ago. The weather was much better and it was easier to get up. We all went to Cafe Zen near Kits Beach. I had a wicked scrambled eggs dish. I thought their menu was much better than Sophie’s.

Today, I went out to brunch again but this time at this Italian cafe across from Zen. It was another great little place. The food, company, and conversation were top notch. I found out everyone’s middle names and what they would name their kids. I said that if I had a girl, I’d name her Oceania and that if it was a boy, it’d be Rudiger. We also talked about if we got married, would we want the bride to keep her own name. For the record, I’d like my wife to choose herself what she wants to do. Though, I’d lean towards her keeping her name.

So yeah, brunch was good today. It seems to get better each time. Afterwards, I only took a 20 minute nap too!

Does anyone else go for brunch on the weekends? If so, where do you go?

BATTLE TO THE DEATH

I just narrowly escaped with my life.

Minutes ago, I stepped out of the shower. I’m going for brunch tomorrow morning and since we’re leaving damn early, I decided to shower before I go to bed.

Anyways, as I was putting my clothes on (I do that in my room and not in my bathroom), I grabbed my PJ bottoms. When I did that, I noticed some flash of movement on my PJ tops which were on my bed.

Upon closer inspection, I saw a spider the size of at least a small dessert plate on my PJ tops.

I knew instantly that before the night was going to be over, either it or myself would be dead… and I had brunch to go to the next morning.

Armed with a wad of toilet paper, we fought for what seemed like a second of time. Though the struggle was long and valiant, I emerged victorious.

What if the thing had layed eggs on my bed though. Ewww…

MUSIC TO FIGHT BY

This is my favourite track from the Reloaded soundtrack.