FREE TV… IT KEEPS GETTING BETTER 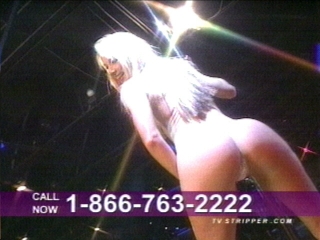 So, it’s 2am in the morning and my fuzzy logic notes are causing me some consternation. I turn on the old TV and I’m flipping around. I get to good old channel 13 and there it is… some ad is on for something called TV stripper.com.

“What the hell is this?”, I think to myself. I watch in amazement as some well-endowed young lady dances around a pole. She looks as if, well as if she was a TV stripper. The whole dance goes on for about five minutes. She never does get fully naked, not even topless, but I guess that’s what the phone number is for. Though, the whole thing was quite titilating, especially if you’ve been reading about stupid mathematical concepts for the last hour. They say less is more sometimes, and I think they might be right.

I’m disturbed to say I watched like three more girls do their little tease of a dance before the paid advertisement was over. Honestly, I still have no idea how people are making money off of this thing (long-distance calls?) but it sure makes 2am go a lot faster.