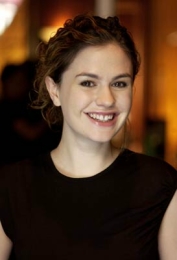 This evening, I had dinner with my friend Trevor. We decided to stay close to his apartment, so we were looking for a place in Yaletown to eat. We were passing by Section (3) and their outdoor patio. As I passed, I saw former VPD spokeswoman Anne Drennan. Thinking this minor Vancouver celebrity would be the best I would see tonight, my eyes shifted to the end of the patio. There, to my surprise, sitting with a female companion was Academy Award winning actress Anna Paquin! I was stunned at first, but I kept on walking. Ms. Paquin is in Vancouver filming X2, the sequel to the movie X-Men. As I took one final glimpse of her, I saw that she was fully immersed in her role of Rogue. She was sporting a very noticeable mane of white down the middle of her hair. Even from a half a block away you could see it.

Trevor and I eventually found a restaurant half a block away. As we sat down, I discussed whether I should have asked her for an autograph. Ultimately, I decided it would be uncool and that a much better solution would be to go back outside and gawk at her in an awkward and uncomfortable manner. Sadly, that did not happen.

It doesn’t take much to get me starstruck. That made my day!