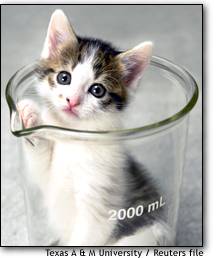 I’m of the opinion that we, as a civilization, may have reached our peak. Why do I think this? Well, it’s because man has discovered the magical combination of a cloned kitten in a beaker. Look at that picture. It’s priceless. It’s cute.

I usually am not moved to cuteness by pictures. When I was at UBC, almost every girl I knew had pictures of babies in their dorm rooms. I was not moved. Nothing. Nada.

This miracle of science in Pyrex ™, however, is different. It’s a damn cloned kitten in a beaker! How inventive is that? They should make t-shirts and greeting cards with pictures of kittens in beakers. Hallmark would make a killing. If someone was smart, they’d make posters of kittens in beakers and sell them at universities. There’d be one in every girl’s dorm room. I bet some guys would secretly buy one too. Hell, I would.

Kitten in a beaker!