TEN YEARS AND ONE DEGREE LATER 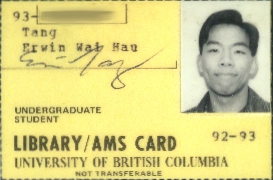 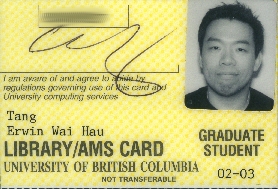 about ten days ago

So, on Friday, I picked up my new library card. I needed to sign out a book before school started. After ten years, I finally have a new card and picture. That old picture might be the weirdest, oddest, and worst picture of me yet. It doesn’t even look like me. I am uncertain what odd combination of angles, lighting, and my ugly mug caused such a poor photo. I had to carry that thing around for five years at UBC.

The new photo is much better. The funny thing is that I had my haircut not two hours after that picture was taken. Oh well, it doesn’t look that bad anyways. I look a bit fatter in the new picture. I can vaguely remember the day the old picture was taken. It was a sunny afternoon in September of 1992. I weighed about 120 lbs. back then. I don’t think I’ve weighed 120 lbs. since. Heh.